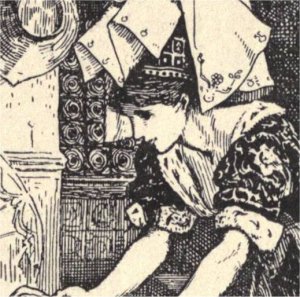 I can’t believe it’s almost May.  I spent from the middle of January to the middle of April writing a 7300 word poem, the funniest thing I’ve ever written, and completely not for kids. I had so much fun doing it, I can’t even tell you. So far, only my darling wife has had the pleasure of hearing it read to her and she loved every bit of it. (Not to exaggerate, but she’s pretty much coo-coo about it and thinks it’s one of the best things I’ve ever written.) Since she’s an award-winning writer and editor, that bodes well. I don’t know how or where to read this thing in public in it’s entirety, but I am determined. It would make a ridiculously entertaining Fringe play, so who knows…

I am now going great guns on preparing my fairy tales for publication. The plan is to polish the heck out them, get them off to my editor and release individual ebooks of the stories for Kindle. The first out will be The Seven Sisters, and I’ve just finished a wonderful buff & shine of it. I also have a really inspired concept for the cover of each and work on those has already begun, so stay tuned. Once all seven are out, I’ll release them in print as The Seven Tales.

I’m currently working on polishing The Boy Smith and the Giant of the North. I tell ya, it’s so satisfying knowing these will be out in the world soon, being read as bedtime stories to kids and adults alike. If I could do nothing but fairy tales till I drop dead of old age, I’d be very happy.